Vision is an important sense humans possess. And Glasses help many to enjoy it fully! The world is also progressively turning obsessively visual. Smart Glasses is the next evolutionary step in the incessant march of technology trying to capture our mind-space through our eyes. By now, we all have been ensnared by the SmartPhone. Even so, a SmartPhone is an awkward appendage. It is not as facile as a wristwatch or as glasses. Eyeglasses have been a part of our being (pardon me for saying that!) for the last several centuries. Through several technological revolutions, this apparatus has remained more or less unchanged in its form and function. No more! Smart technologies are now attacking to lay claim to the real estate of the nose bridge and hitch a ride on the banal eyeglasses to nirvana. And what a ride it is going to be!

For last several years, manufacturers across the world are refining their optical prowess to come up with the ideal SmartGlass. The craze started with Google Glass circa 2013, and today the world is waiting with bated breath for the impending release of rumored Apple Glass. What makes these glasses such a magical device? And if the technology is around for so many years, why has it not captured the public imagination? Do these glasses really work? And how do they work?

Let us take a brief look at the technological marvel called SmartGlasses, understand a little bit of the technology behind it, and also see some practical use cases. While we are at it, it would be unreal not to chat about Augmented Reality and Virtual Reality! 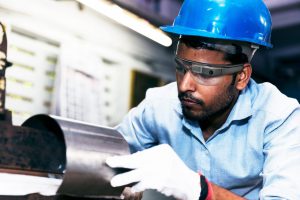 SmartGlasses display content on the lens of the glass. This is usually achieved by using projectors and prisms. This projection creates a partially transparent display on the lens. This does not obscure your vision of the surrounding. There are now some SmartGlasses that use a newer technology named waveguide holography. This additional display, superimposed on our real surroundings is what makes this experience magical and, well, uber-useful. And oh, this can be a 3D experience also, if the glasses are binocular, as against monocular. SmartGlasses also contain a lot more than just the display. There is sound – so high-tech speakers and mike, a camera – at times multiple cameras, including an IR camera. And a CPU and a touch area and the battery. Whew! It takes a lot of wizardry to compress all this technology into a glass form-factor. And herein lies one of the reasons why they have not yet inflamed the human mind. Till now, most glasses would make you look like a dork or a nerd. They were bulky, ungainly, and certainly not a fashion accessory!

But that has not stopped the industry from adopting this device into their processes and workflows. Industry has capitalized on its capabilities without unduly weighed down by its limitations. A little time and training is required for an operator to get acclimatized to wearing these glasses, operating them, and yet do the work. There is a perception of safety risks due to the ability to get distracted away from the real world. Studies have found that this risk can be mitigated by purpose-designed interfaces along with the focused content display.

At VirGo, our focus on SmartGlasses is to make them a first-class tool on a shop-floor to improve workplace productivity and safety. We aim not only to use their hands-free potential but also to exploit the ability to connect one or more remote experts by giving them the first-person view of the shop-floor. This has an immense advantage in terms of augmenting the capability of the operator on the shop-floor to overcome problems, breakdowns and other work stoppages.

So, join me on the magic carpet ride to have a bird’s eye view of the SmartGlass landscape. Let’s pick some nuggets of information while we are about it. Let us spelunk a bit in the technology caves. And soar high above to drink in the business vista!

Any cookies that may not be particularly necessary for the website to function and is used specifically to collect user personal data via analytics, ads, other embedded contents are termed as non-necessary cookies. It is mandatory to procure user consent prior to running these cookies on your website.